Kare Kare is a Filipino favorite served mostly during festivities. It’s history is vague with several sources suggesting that Kare Kare might have originated from Pampanga, or might have been a regal dish of the Moro elite before Spanish arrival, and it could also have been from Indian soldiers who settled in the Philippines during British Invasion. (source: Wiki)

The most exciting theory? that Kare Kare was a regal dish of the Moro elite. The Moros are  indigenous to the Philippines.  Their history dates back to 13th-14th century Arab traders who settled and established their religion and kingdoms around the archipelago, 200 years before Spanish rule. With the dish’s random yet simple but time consuming preparation, it sounded to me like a recipe that would’ve been whipped up by a cook to impress royalty.

I mean really… think about it…

Oxtail/beef/tripe are cut, prepped, and simmered to tender for hours,  Peanuts are roasted and manually ground to a paste to flavor the stew, Rice is toasted brown and also ground up to make the powder to thicken the peanut sauce, and  Annatto seeds are steeped in water/broth to give the Kare Kare a reddish -orange color.

And the work doesn’t end there.

Leafy vegetables and eggplants are stir-fried separately and served as a side,  along with the shrimp paste dipping sauce to add a salty “umami” flavor to an otherwise mild tasting savory peanut sauce.  Clearly there was a lot of creativity that went into the creation of Kare Kare. (Recipe: here) 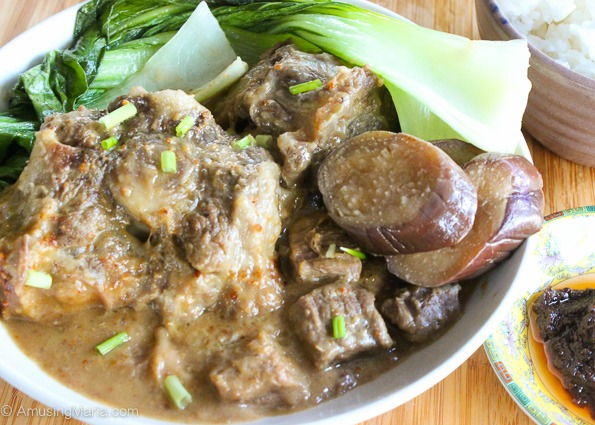 Did Kare Kare’s origins come from the Moro elite?

Who would’ve thought that cooking Kare Kare for the first time and as traditionally as possible would lead me to explore it’s origins.  It has made me very curious since a lot of Filipino dishes can be traced to foreign influence such as Chinese, Spanish, and American but none have any dishes similar to Kare Kare.

When I isolated the Moro elite theory among other theories, the more I was convinced of the possibility that Kare Kare’s origins may have even existed prior to Spain setting foot on the Philippines. 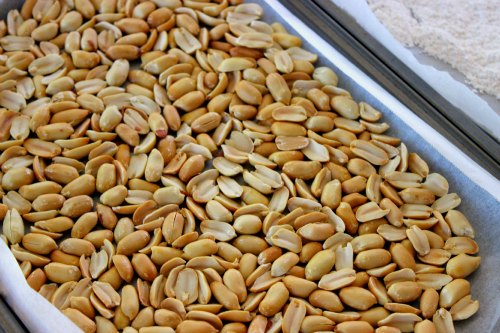 And the plot thickens… into Peanut Sauce.

To know Kare Kare, is to know the origin of it’s main ingredient: Peanuts. So in my research, I am whisked (by peanuts)  into a whirlwind of  link after link after link about the 14th to 16th century, galleon ships, tribal warfare, Spain, Portugal, and the Indian Ocean. Before I knew it,  weeks have passed and I’m still reading about the  galleon ship drag race between Portugal and Spain.

Peanuts were said to be introduced by Magellan, to the Philippines in 1521. Since reading up on galleon trades and Spain’s struggle through the Pacific Ocean, I wondered how Magellan could have introduced Peanuts to the country.

Magellan, a Portuguese explorer hired by Spain to sail across the world took 2 years (1519 to 1521) to reach Asia (with stopovers in South America). The last  3 months were spent crossing a vast ocean from South America to Asia where the crew arrived starving (eating sawdust and cowhide/leather) and suffering from scurvy.

Don’t you think the Peanuts, if there were any on board the ship, would have already been eaten by the crew way before their ship even reached the Philippines? And even after days on the island of Samar (March 17, 1521), they were still desperate for food.  The Philippines at this time was not even called the Philippines, it was a group of islands ruled by chiefs/sultans/datus and consisted of different tribes. 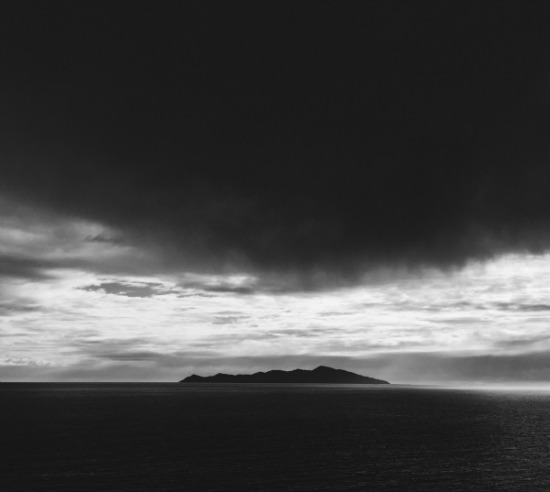 Magellan, who involved himself in tribal politics, was killed in battle (April 27, 1521), and his crew  left the Philippines on May 2, and finally reached their intended destination, the Spice Islands, on November 28, 1521.  It would be around 40 years later, in the late 1560’s that Spain would come back and  conquer Las Islas Filipinas or what is now called The Philippine Islands.

So how could’ve Magellan introduce Peanuts to the Philippines if his hungry crew  ate all the peanuts on board the ship? A possible theory would be that peanuts were introduced indirectly or directly by Portugal through the western shores of the Philippine Islands.

You say… but Portugal is almost as far as Spain!

The earliest depiction of peanuts were found in Peru or Brazil around 7,600 years ago.  Portugal colonized Brazil in the 1500s and was already established in trade across the Indian Ocean as early as 1498. The Portuguese were the first Europeans to arrive in Malaysia in 1511 then on to Indonesia in 1515.   It is highly possible that Portugal introduced peanut cultivation to these two countries by trade and eventually, peanuts spread around other Asian countries.

Peanuts may have been brought over to the Philippines either by Portuguese explorers or by Arab/Moro sovereignty even before Magellan set foot on the islands in 1521.  There are documents supporting Portuguese explorers in the Philippines years before Magellan and when his ships did arrive, they were told by the tribes people that their crew were not the first European looking men they’ve seen! 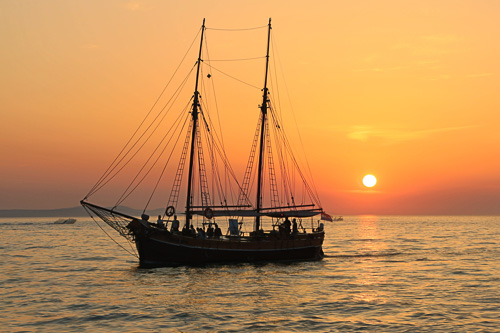 If Kare Kare existed pre-Spain and is truly a dish for the Moro elite, peanuts would have had to exist way before Magellan was said to introduce them to the Philippines. Also, another fun fact that contributes to the theory is shrimp paste. It is said to have  been used in Southeast Asian countries since the 8th century.

Kare Kare is not complete without shrimp paste. It is what makes the dish.

So what do you think? We have two main ingredients that make Kare Kare unique to other Filipino dishes. Peanuts that may have possibly been introduced in the early 15th century and shrimp paste that has been around since the 8th century. Then there were the Moros or Arab traders who settled in the Philippines in the 13th-14th century, who would have traded with Portugal since the country monopolized the Indian Ocean.

Now that I’ve explored the “Moro elite” theory of Kare Kare and convinced myself that it is a royal dish pre-Spanish time.  Here’s a wrench (or wrenches?) that I am throwing at the whole theory…

1. Magellan had already been to Malaysia in the early 1500’s before his contract with Spain

2. The only dish I could find that closely resembles Kare Kare and how it’s cooked is Mafe or Peanut/Groundnut Stew from West Africa.  The recipe also calls for  cabbage, okra, and eggplant which are the same vegetables used in Kare Kare. (well… actually, Portugal had colonies in West Africa too…) 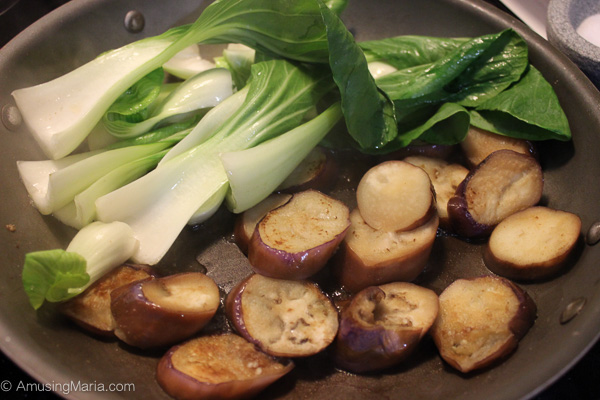 The kicker similarity between Mafe and Kare Kare? Both dishes are eaten with steamed rice!

Huuwhaaaat?!? so close right? I was dumbfounded.

It would be fun to research the possibilities of how two dishes from different continents can be so similar but that would have to be saved it for later.

Here are other dishes from other countries that also use peanut sauce:

Kare Kare is full of historical culinary mysteries and is probably one of the oldest dishes in the Philippines.  It was fun to explore one possible origin of one of the most beloved Filipino dishes in my country.  I would have loved to explore all the possibilities of Kare Kare’s origin but, to quote Sweet Brown: “Ain’t nobody got time for that!”  So, bear with the inconsistencies of this article and remember what it’s about. It’s a fun theory, and not for academic purposes.  If it seems that I am trying to disprove what had already been written in history, that is not my intention.  I am not a historian and all of my opinions are theoretical.