This Kumquat Marmalade Pie recipe makes use of homemade Marmalade as seen here.

There was a mix of mix of excitement and curiosity upon receiving a box of Kumquats from my Aunt in California. It was exciting to have orangey pieces of sunny California days during the Virginia’s cold snap.  I was also curious to find out what could be created from this often ignored citrus fruit. Pies, tarts and cheesecakes flavored with lime, lemon, and orange are so popular. Why not Kumquats?

I  initially thought to use Kumquat juice for the pie filling, however, the juice was so tart that I couldn’t taste the sweetness of the fruit.  Prep work for Kumquats takes time which I thought was better spent on making marmalade and nothing else. If a pie filling was made from fresh Kumquats, one would have to prep the fruit much like in a marmalade. When I realized this, it only made sense to use Kumquat marmalade as an ingredient for the pie.

This pie has a light filling that’s sweet, mildly tangy, and with subtle bitter flavors. 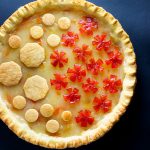 For Base of Pie:

Like this Recipe? Here’s an Easy Kumquat Ginger Cake by Molly @ Easy Cooking with Molly.