It had been a crazy first week in Manila, Philippines with family parties, outings, and jetlag. Then, we went to Puerto Princesa City in the island of Palawan.  A beautiful island west of the Philippines.

We had signed up for several tours there, but on our second day, we decided to cancel our island hopping tour in Honda Bay. It was a rainy day and being stuck in a boat in bad weather didn’t sound ideal.  We also just wanted to do things on our own time with no schedule to follow.

I tried not to think about how much the tour agency will bill us for cancelling at the last minute.  My feelings of guilt and regret, even though minimal, were still ridiculous.  It was our vacation but I still felt compelled to follow someone else’s schedule!

This made me think about how much of our time we give to others without a second thought, and that time is the most precious commodity we have.  Cancelling our tour and being charged for it was like buying back our time.

Andy and I hired a tricycle driver to take us around sites relatively close to Puerto Princesa city center. It was clearly going to be an off the beaten path adventure as soon as we sat inside the tricycle. Two amply sized individuals sitting in a motorcycle sidecar meant for two petite sized Filipinos. We were squished with our arms and legs like puzzle pieces in Tetris each time Andy and I would try to adjust ourselves to a more comfortable position. It was fun and amusing even in our discomfort and it made me think of a clown car. 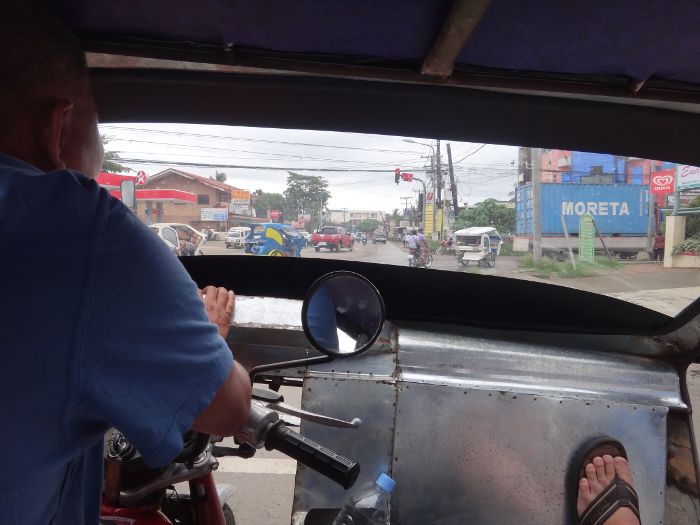 Our first stop was 30 minutes from the city at Irawan Eco Adventure Park. Once we arrived, the rains started again. We arranged to do the canopy walk and were instructed to sit on cushioned benches in the back of the pickup truck. Another 15 minute bumpy ride through a dirt road in Palawan’s lush forest took us to our destination. The downpour gave us some time to sit and chat with a local who would assist us in donning our harness for the canopy walk. This was about the time we realized that a canopy walk meant a hanging bridge with bamboo steps arranged like missing piano keys. It was a daredevil move for me to even make it to the first step, I backed out and took pictures of Andy crossing the bridge. 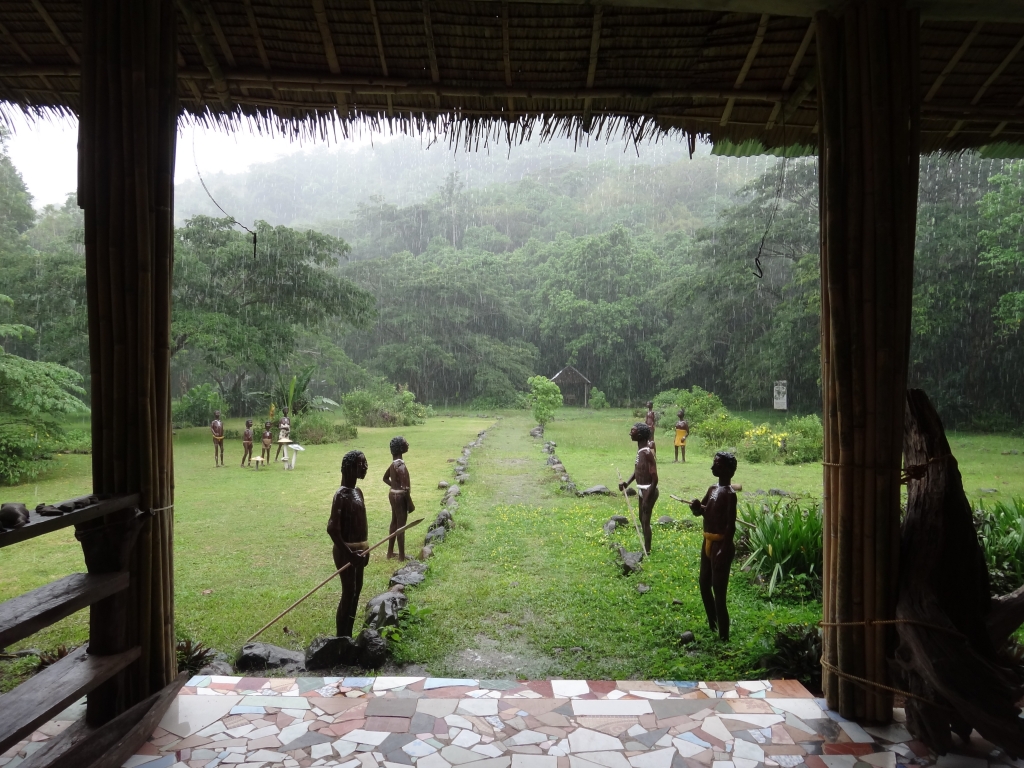 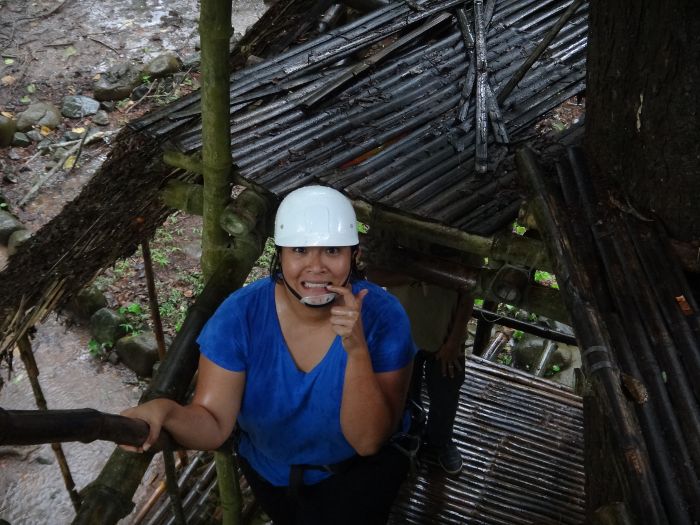 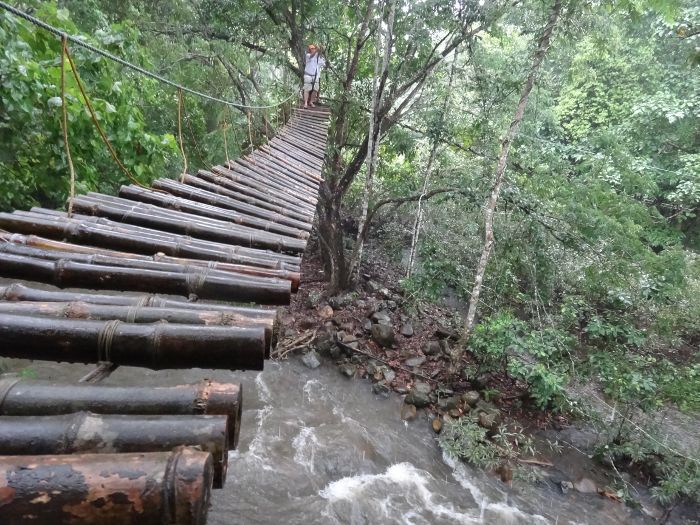 There were other activities we could have done at the park but the rain deterred us so we just opted to eat lunch and try the Crocodile Sisig, a dish served on a hot cast iron plate with chopped crocodile meat seasoned with onions, garlic, and chilli peppers with a side of steamed rice. 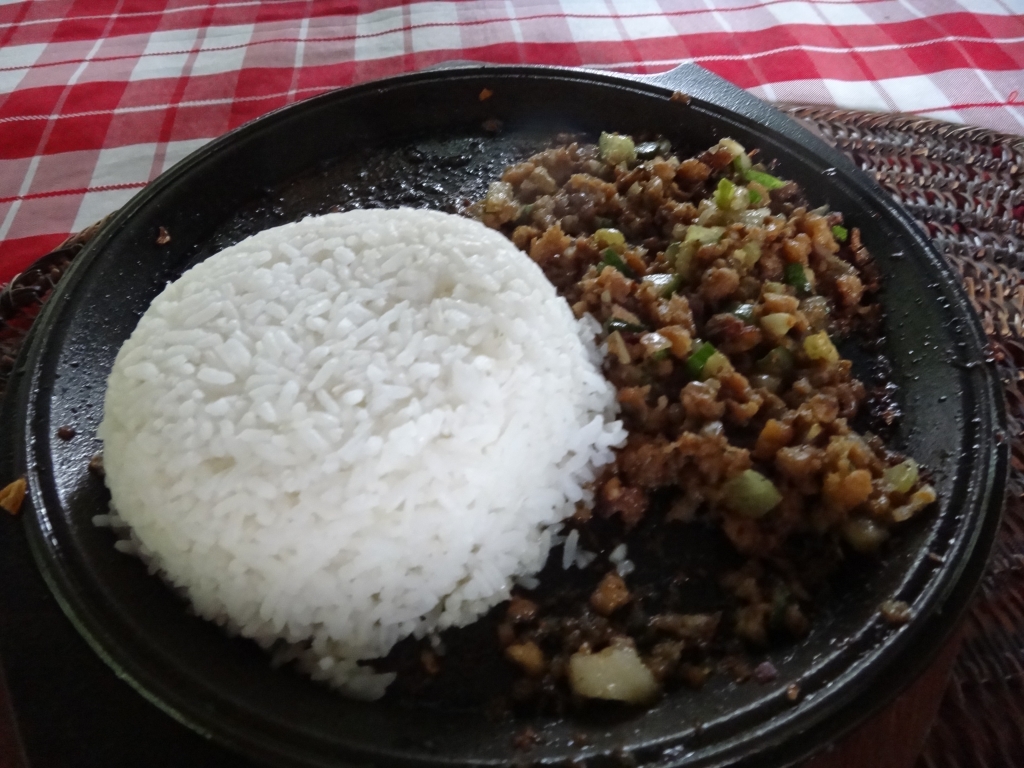 Our tricycle driver, Kuya Bong (Kuya means older brother in Filipino) who has lived in Palawan for years, joined us for lunch. An interesting conversation with a mix of various topics like life in Manila, Puerto Princesa, and the US ensued and cultural differences in food, society, and customs revolved around the dining table. Andy and I got to know Kuya Bong better and vice versa. He was pleasantly surprised that Andy, who was born and raised in the US, loved Filipino food. We helped ourselves to a complimentary dessert of red bananas that only grow wild in tropical forests while we discussed what our next sightseeing stop would be.

Kuya Bong asked us if we wanted to see some caves in a private property called Kuyba Almoneca. We perked up and agreed right away since we had not heard of these caves even with our extensive web search of sights to see in Puerto Princesa while Andy and I were still in the US.

Kuya Bong experienced some technical difficulties on our way to the caves which gave Andy and I photo ops by the roadside. 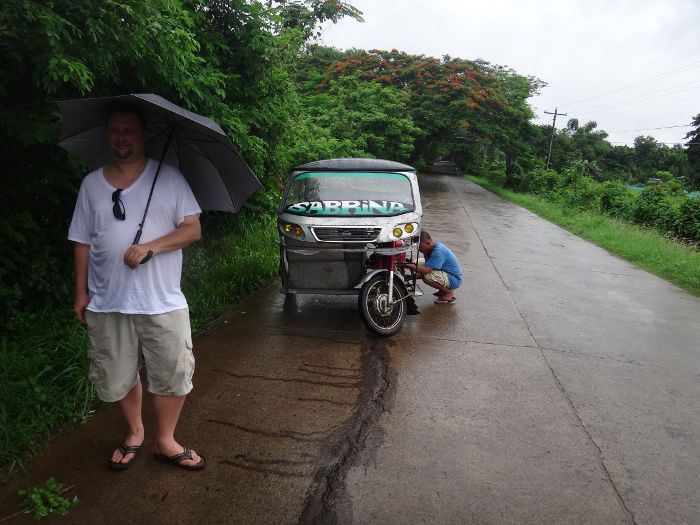 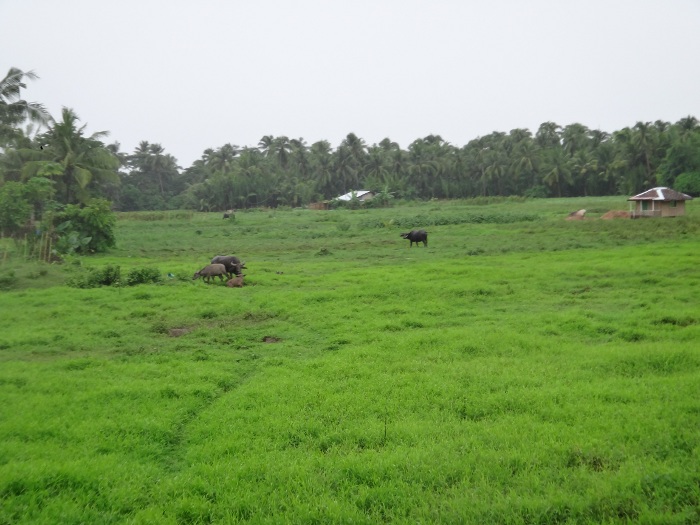 Kuyba Almoneca is a spiritual place for anyone who appreciates the wonders of nature no matter how large or small it may be. The caves were beautiful and the meditation garden and chapel is a work of art. Our cave tour ended during “merienda” time where Filipinos usually have coffee and pandesal (local bread roll). Kuya Bong was already sitting with the employees of Kuyba Almoneca and we were graciously invited to join them for merienda and chitchat.  Andy and I were blessed once again to just sit and relax while getting to know the residents of Puerto Princesa. 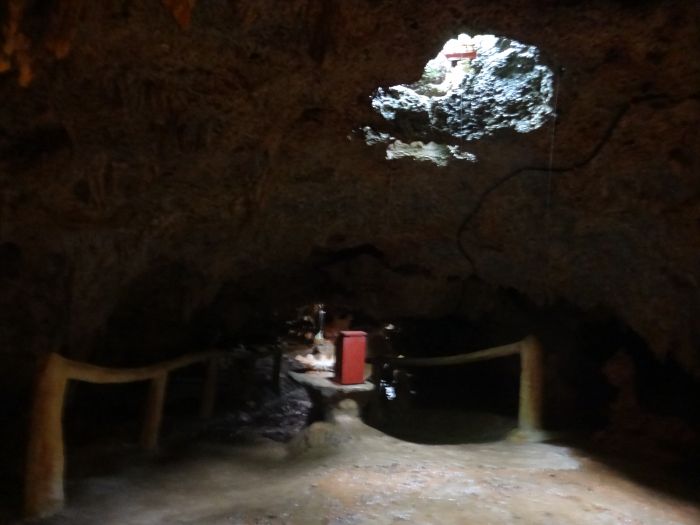 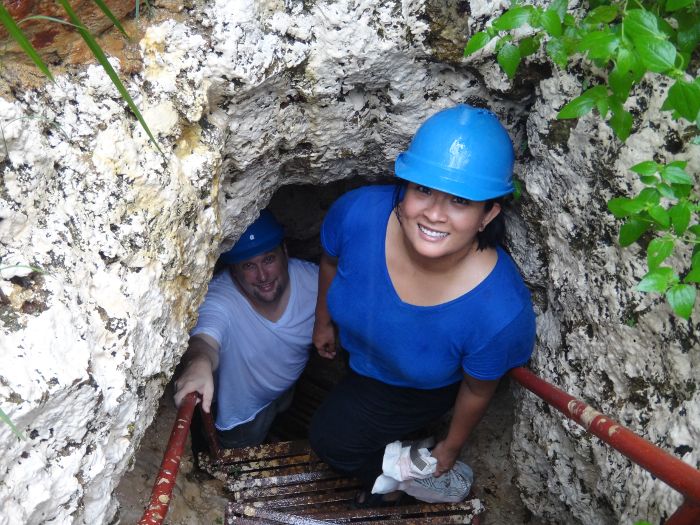 This telling of our off the beaten path day in Puerto Princesa is fueled by meeting the steward of Kuyba Almoneca, Pete Montejo. A man Andy and I found to be humble, warm, friendly, and spiritual. I am paraphrasing what he said to us but his words struck me as uncanny.

Pete said, if one has the time to spend whether to travel, be with loved ones, and even simply to sit and chat for merienda then that person is truly rich.  Time, he said is a sign of true wealth.

I was suddenly in one of those moments where obstacles in one’s day just suddenly make sense.

Unplanned journeys are usually the ones that are the most memorable.  Andy and I decided to break the rules and not follow a schedule. Rather than climbing on the same bus for the same day that every tourist in Palawan is told is a must, we improvised and explored. Doing so, we saw a side of Puerto Princesa that most probably do not have time for, we tasted new foods and ideas, and we made unexpected friends. 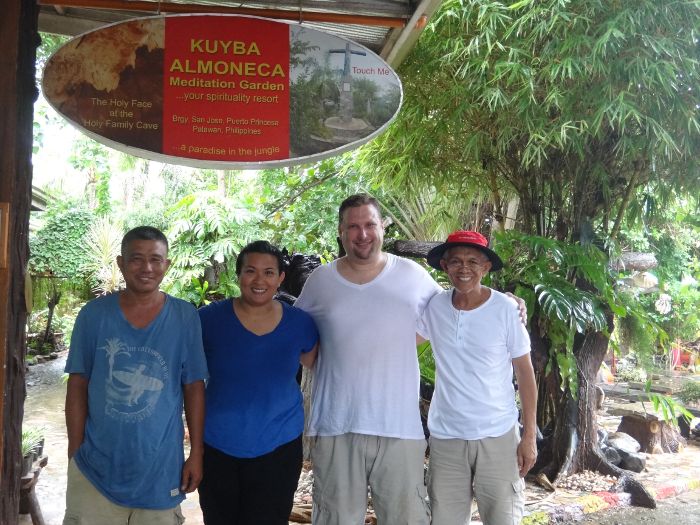